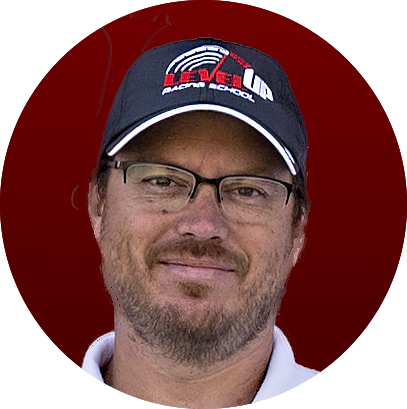 Keith Watts is a 30-year veteran of the racing community. Keith has been teaching full time for 21 years. Keith began his racing life at age 10 in go karts on dirt ovals. He quickly switched over to the WKA (World Karting Association) Manufacturers Cup. In 1994 he won 2 national titles in WKA against very well known and now professional race drivers.

At age 19 he was hired on at Skip Barber Racing School. From 1996 to 2016 Keith has taught racing schools as well as coordinate pit lane for their race series. His driving career(if you call it one) has ranged from Formula Fords to Dirt Late Models. 1996 was a big step after winning Bridgestone’s Racing Academy talent search. After racing in Canada for a year winning 11 races in the series, a mechanical would place him 3rd overall. He competed in some of the SCCA Pro Series Shelby Can-AM series in late 1996/1997. This was a unique opportunity to drive an open wheel car and a closed wheel car all in the same lap while missing 2 cylinders from a real Can-Am car!

In 1998 Keith competed on a limited schedule in the Barber Dodge Pro series with top 10 finishing results. In 2000, Keith made the switch to oval racing, competing in a limited schedule of ASA stock cars. That led him to a car owner where he tuned and raced a vintage 1965 Corvette in B production in the SVRA series. From there Keith coached in some vintage racing. And most recently, Keith has been campaigning his own dirt late model on tracks in the southeast.

In addition to coaching racing, Keith has been teaching high threat, Law Enforcement and U.S. military personnel for 15 years.

Hobbies and other interest include radio-controlled aircraft, full scale flying, fabricating, Mopar muscle cars, competitive shooting, and spending time with his wife, Mel. Mel is somewhat known in the industry as she has worked for Skip Barber in years past as a timing and scoring staff and babysitting Keith while at the track. Keith met Mel as she was a student in a racing school some 14 years ago. There is no doubt that racing is in the family. Mel crews on the dirt late model that they campaign on a limited schedule.